Dan’s family law practice includes representing clients in all domestic matters such as divorce, child and spousal support and child custody. He regularly drafts and negotiates important domestic contracts such as property settlement agreements and pre- and post-nuptial agreements. Dan has been honored as a Top 100 Family Law Attorney in Pennsylvania by the American Society of Legal Advocates. Dan’s family law practice routinely takes him to court for Protection from Abuse matters, and, on occasion, Dan volunteers his time through Legal Aid of Southeastern PA to represent individuals pro bono in such matters.

Dan’s criminal practice includes serving on the Bucks County Criminal Court Conflict List, from which he receives court appointments in criminal matters with a focus on juvenile and diversionary courts. In this capacity, Dan regularly appears in in the Bucks County Court of Common Pleas for juvenile delinquency matters. Dan also spends a great deal of time representing clients in Bucks County’s numerous diversionary courts, ensuring admittance into such programs as Drug Court and the Youthful Offender Program. Finally, Dan regularly volunteers time to represent veterans of the armed forces in the Bucks County Veterans Court program.

Dan focuses his civil practice on litigation matters that arise from the firm’s thriving Homeowners and Condominium Association practice. Dan also receives appointments from the Bucks County Court of Common Pleas to serve as a Partition Master, which provides Dan with the opportunity to draw on the experience he has gained from his family and civil practices to resolve property disputes.

Dan currently serves as a Solicitor for the Bucks County Children & Youth Services Agency. He is also a member of the Bucks County Orphans’ Court Attorney Appointment List from which he receives court appointments to represent parties in guardianship and termination of parental rights litigation matters. Dan previously served on the Pennsylvania’s Children’s Justice Act Task Force, a federally funded program designed to improve the investigation, prosecution and judicial handling of cases of child abuse and neglect, particularly child sexual abuse and exploitation, in a manner that limits additional trauma to the child victim.

Dan is a graduate of the University of Pittsburgh School of Law. Following law school Dan spent seven years in the Bucks County District Attorney’s Office where he served as an Assistant District Attorney until being promoted to Chief Deputy District Attorney. While in the DA’s Office, Dan prosecuted more than 1000 DUI cases and argued before the Pennsylvania Superior Court. Dan was one of only five trial coordinators during his time in the DA’s Office and prosecuted homicide by vehicle and murder cases. He also served as the Chief of Narcotics Prosecutions for several years where he oversaw the prosecution of every drug related crime in Bucks County. Dan draws on these experiences when representing individuals who have been charged with Driving Under the Influence, Drug Possession and Delivery, Simple Assault and Theft.

Dan’s legal experience also includes previously serving as a member of the Bucks County Children & Youth Attorney Conflict List, from which he received court appointments to represent parents in dependency and termination of parental rights matters, and serving as a conflict attorney for the Bucks County Office of Guardian Ad Litem, from which he received court appointments to represent children in dependency proceedings. Immediately prior to joining Clemons, Richter and Reiss, Dan spent four years in private practice where he represented clients in domestic, civil and criminal cases. 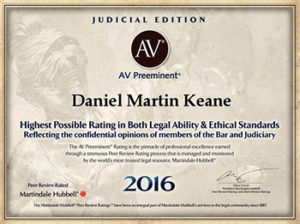 Currently Dan serves as the President of the Bucks County Bar Association and previously served as the Vice President and Board Secretary after spending six years on the Board of Directors. He is also a member of the Family Law, Criminal Law and Orphans Court Sections of the Bar Association.

Dan was selected to the Pennsylvania Super Lawyers list in 2017, 2018, 2019 and 2020 and is AV Preeminent Peer Review Rated by Martindale-Hubbell. Dan is also Superb rated by AVVO.com.